Why does Later feel so much more appealing than Now? 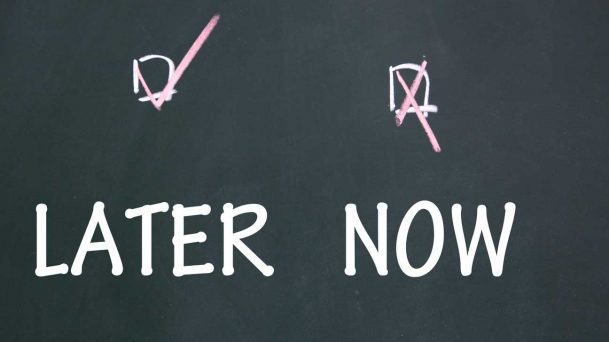 It is known as “The Thief of Time” or “The Assassin of Opportunity.” These are not glowing descriptions. So why does something that is so bad for us in the long-term feel so good in the moment? Whether it is something small or a major life decision with real consequences, it is easy to fall victim to the alluring idea of “not now, but later.” We may have learned the art of procrastination early on in childhood with putting off homework assignments, or it may be a newfound mode of not doing what we are supposed to be doing at work or at home. Regardless of when it started or how great we are about reconciling it, procrastination is a tricky mix of a mental concept that can create real problems for ourselves and for those around us. Luckily, there are ways to kick the habit or at least to consider alternatives to the seemingly appealing idea of delaying the inevitable.

The first step in loosening the hold that procrastination has on your life is to take a hard look at the origin of the issue. Ask yourself (or if you aren’t great at remembering, ask people like family members who may have more accurate recall) what you were like as a child. Were you the kid who never did his homework on time? Did you wait until the last minute to put your shoes on to get out the door? Maybe you grew up in a household of procrastinators and this behavior became normalized. Did your parents forget to pay bills on time or always seem to owe a library fine for overdue books? Maybe the idea of due dates and time boundaries were more flexible when you were learning about the ways of the world. Or if you were the only one dragging your feet to complete tasks and it was a big problem, your parents probably had to give you more attention or help. Maybe you not following through with tasks on time on your own meant someone else picked up the slack for you. Learned helplessness is a real thing. And not to jump on the bandwagon of blaming our parents for all our problems as adults, but it is possible that a message got communicated to you early on that procrastination was no big deal or someone else’s problem. Luckily, you can figure out a new way of thinking about this regardless of what you understood in your early years. But it can be helpful to look at how long this behavior has been going on to determine the right ways to challenge it.

People who are experts at procrastination have likely been doing it for a while. You may be one or know one of those people who say, “I do my best under pressure. I always leave things to the last minute, but that’s when I do my best work.” But whether you came out of the womb not following through on timelines or it is a little something you picked up in your post-collegiate years, it is also important to think about how much being a procrastinator is part of your identity. Does thumbing your nose in the face of deadlines make you feel powerful in a way? Probably not in the long run. What may seem thrilling in the moment might have long-term consequences that would classify you as lazy or irresponsible (which doesn’t seem quite so thrilling). The important thing to remember is that we are capable of change. However deeply engrained our patterns are, there is always hope to be able to do, act, and be different.

Another piece of the procrastination puzzle is what this behavior has achieved or continues to achieve for you. What do you get out of this habit? The anxiety that builds when you have something to do but put it off can be thrilling and exciting. Does the idea of living on the edge give you more motivation? Another psychological gem that procrastination can produce is avoidance. If a task like contributing to your 401K or getting that full body scan done at the dermatologist’s office sounds like the worst thing ever, it makes sense to employ the tactic that allows us to avoid those tasks. We don’t have to deal with all the feelings or reality of hard things if we just put them off. Yay for the fun of now!

Yet another wonderful aspect of procrastination is that is can also allow us to live in a world of all-or-nothing thinking. If we are perfectionists, procrastination can be our cherished friend. If we expect our actions, life, selves, etc. to be perfect and yet we can’t achieve that, it can make a lot of sense to put things off. If we can’t do everything perfectly right now, why even try? And finally, another check mark in the procrastination column is that it can keep us feeling really terrible about ourselves. Rarely do people act productive and then think, “Wow, I am the worst. I cannot believe I did everything I needed to do! Argh, this just feels awful.” Nope, failing to follow through on things is more what leaves us feeling that way. But if you have a self-concept that is all about feeling chaotic and that you are terrible at life, well, yes, procrastination is going to be right up your alley. It can allow you to live in a space where you feel justified in feeling bad about yourself and your lack of accomplishments.

But let’s be real. The upsides to procrastination are actually pretty unfulfilling when you think about it.

Once you understand the beast, you can conquer it. If you know when and how it started and what it looks like, you can feel a little more in control. The all-or-nothing thinking that feeds a mental concept like procrastination is really important to challenge in these moments. Here is the thing: You absolutely can’t do everything, but you also can’t do nothing. So just try to do something. Start addressing procrastination by getting yourself organized. What is the task and what are your roadblocks? How can you strategize to avoid those distractions? If the task is preparing a presentation for work, maybe you need to log some time at a coffee house or a quiet workspace versus trying to knock that out when Netflix is on. Notice the times when you are most productive or the tasks that come to you most naturally. Then schedule yourself to be proactive during that part of the day or the week. There are probably millions of day-to-day responsibilities you have to do that you take on mindlessly and don’t delay, like making coffee or opening emails. Figure out what you already do and build on that. And try to stay away from extreme thinking; you won’t just change this overnight. Be realistic with yourself but also give yourself that push to do things a little differently. If all else fails, take a breath and try to visualize how it would feel to do the task at hand ahead of time or on time. You will feel powerful, strong, capable, and proud. You already know what it feels like when the excitement of procrastination wears off and you are stuck with the reality of some seriously awful consequences to your lack of action. Try something a little different. Move towards the now and I bet later will eventually feel a lot less appealing.